Autonomous robotic systems can support humans in various ways. They operate in hazardous and inaccessible areas and make work easier for people by relieving them of monotonous tasks. Current applications include assistance robots in manufacturing environments, autonomous heavy machinery in contaminated areas, reconnaissance robots in disaster areas, and robotic systems for deep-sea inspection and exploration tasks.

The demands placed on the functionality of autonomous robotic systems are significantly higher compared to conventional industrial robots. The aim is that mobile systems operate autonomously in unknown and dynamic environments to fulfill their assigned tasks. For this purpose, it is essential to explore and model the environment in a suitable way. The information gathered by sensors has to be combined to allow for an accurate positioning. In addition, the perceived surroundings have to be consolidated in an exact map representation. Having acquired this knowledge, the robot is able to plan an optimal collision-free path to a given goal and to perform complex handling tasks.

To cope with the variety of requirements for autonomous mobile robots, many complex sub-functions have to be realized. Fraunhofer IOSB has developed a large number of powerful and robust algorithms for the implementation of autonomous functionalities. For this purpose, methods of multi-sensor fusion, control systems, and artificial intelligence are applied, such as algorithms for simultaneous localization and mapping (SLAM) and motion planning in unstructured terrain as well as path planning and control for manipulators.

Although the different capabilities can be realized in individual algorithms, these are often strongly interdependent. The concept of an “Algorithm Toolbox for Autonomous Mobile Robots” pursued by Fraunhofer IOSB is to develop algorithms in the form of modular components that can be used in a flexible manner despite the known dependencies. This allows to easily adapt the module configuration according to the desired functionality for different robotic platforms, environments, and sensor
setups.

Autonomous navigation requires the mobile robot to precisely locate its position in the environment by sensors. For instance, incremental measuring procedures like wheel rotation sensors and absolute measuring sensors like GPS and compass can be used. As the data of a single sensor are often inaccurate due to noise, measurements of different sensors are combined by multi-sensor fusion to increase the localization accuracy. By adding further exteroceptive sensors (laser scanner, cameras, etc.), the mobile robot is also able to localize its position and attitude in a map by observing the environment. However, in an unknown environment the robot has to create a map first. Due to uncertainties in the sensor data, the initial localization and map are not yet precise. The challenge is to continuously improve the localization as well as the map by fusion with current sensor data. For this purpose, Fraunhofer IOSB has developed probabilistic methods for simultaneous localization and mapping (SLAM) in combination with multi-sensor fusion that model dependencies and uncertainties and allow building a precise map.

An efficient motion planning is vital for the autonomous capabilities of robotic systems. Its most important aspect is to avoid collisions with objects in the environment. Therefore, three-dimensional environment perception is necessary in order to consider obstacles in the motion planning process. The developed algorithms include motion planning for mobile robots as well as path planning for manipulators. Many different optimization criteria can be incorporated in the planning, e.g., minimizing the path length or grasping of objects as efficiently as possible. An integrated planning and control for manipulator and mobile platform allows for an optimal utilization of all degrees of freedom.

The “Algorithm Toolbox for Autonomous Mobile Robots” by Fraunhofer IOSB allows to equip a variety of robotic systems with autonomous capabilities relevant for their intended purpose with minimal adaptation effort. Customer-specific extensions for indoor and outdoor applications can be flexibly integrated thanks to the modular concept.

The project was funded by the Federal Ministry of Education and Research (BMBF). 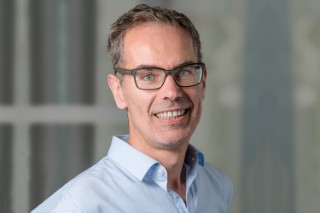 Head of Department Systems for Measurement, Control and Diagnosis