Digitalization is transforming practically every area of life. What impact is it having on defense research?

Michael Arens: The battlefield is changing, though not merely because certain aspects of it have been relocated to the realm of cyberspace. Instead, we’re also seeing a shift in the requirements made of armed forces in the real world. With digital technologies available to everyone worldwide, armed forces must ensure they are physically equipped to combat so-called peer adversaries. They need to rapidly process large amounts of intelligence data from different sources so as to build an accurate picture that enables informed operational decisions. For example, they have to be able to operate in GPS-denied environments. At the same time, with weapon systems being transformed by digitalization and automation, the emphasis is now on alliances of highly networked and partly manned/partly unmanned units. All of these considerations play a key role in, for example, the advance discussions on the development of a new European battle tank system. So there’s a lot of research and development work to do.

What kind of contribution will Fraunhofer IOSB be able to make here?

Arens: We have expertise in a whole range of technologies that will be crucial for meeting these challenges. For example, we have been developing systems to help evaluate sensor data and other information or fully automate these processes for many years now. This process starts with data acquisition – for example, through the use of planning tools for sensor deployment – and includes the requisite IT systems and architectures for data storage and data sharing between alliance partners. It also involves not only the algorithms used to extract and evaluate information but also systems that can present even the most complex situations on a wide variety of device platforms and in a manner appropriate to specific roles, thereby enabling rapid action.

And what about areas beyond the intelligence cycle and the interpretation of reconnaissance data?

Arens: We’ve got a lot to contribute here as well. In the field of GPS-denied environments, for example, we’ve been working for some time now on image-based localization and navigation. And we also have the ability to automatically reference other kinds of information within space and time, which means we can fuse this data to form an overall and unified virtual picture. This will be crucial for the future weapon system alliances we referred to earlier, which will comprise manned and unmanned units, and where perhaps one unit will be able to see the target, while another one has to fire at it. When it comes to creating these unmanned units, we have extensive experience with autonomous systems in hostile environments.

The computer scientist Dr. Michael Arens is head of the Object Recognition department (OBJ) and spokesperson for the Defense business unit.

Learn more about the fields of application and technologies of our business unit Defense.

To the business unit 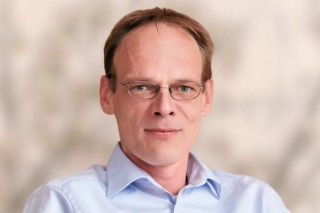